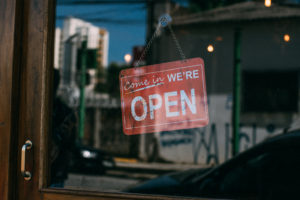 Retail and service areas located on ground floors have long been a fixture of modern residential projects. How much of such space is actually completed every year and is it successfully commercialized?

Unlike shopping centers and retail parks, this niche segment of the retail property market is not the subject of detailed reports from real estate experts and defies easy analysis. Indeed, there is no official data that shows its size and the number of transactions in which it is involved. Meanwhile, commercial units have become a ubiquitous and an inherent element of new schemes built by residential developers who maintain that the supply of and demand for this kind of product remain at a stable level or have even been going up of late. 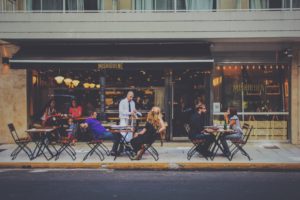 The annual supply of new commercial space that is included in residential developments is hard to assess as analysts tend to focus on retail projects comprising at least several thousand sqm of GLA, and retail areas in residential buildings are usually smaller. For their part, residential developers – who typically disclose the number of apartments in their new projects – often fail to mention the amount of the accompanying commercial areas in the schemes, noted Szymon Łukasik, head of the retail department at Cresa Poland.

According to Michał Bukowski, an expert at Home Broker, in most cases – provided that the potential is there – residential developers tend to build as much commercial space as they can. This is because such space is cheaper to develop than apartments and is sold at a higher price. However, this mostly pertains to projects in central locations and those located close to major roads. When it comes to projects in outlying locations, most developers try to minimize the amount of commercial space, claimed Tomasz Kołodziejczyk from redNet Property Group. 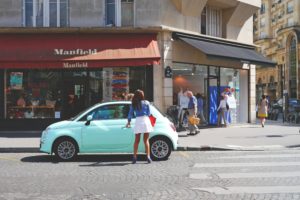 As a result, while the majority of residential investments these days feature some amount of commercial space, the number and size of the units vary a lot depending on the location. Very often a project comprises several hundred sqm of such space. However, there are also mediumsized schemes in the market that offer much more of it. A project that developer Unidevelopment built in Warsaw’s Targówek district houses, apart from 127 apartments, more than 4,000 sqm of commercial area.

Warsaw Stock Exchange-listed Dom Development, one of the largest residential developers in Poland, has completed an average of approximately 50 commercial units annually over the last three years. Over the same period, the company sold an average of 63 units a year. Radosław Bieliński, the spokesperson for Dom Development, said that commercial units are planned in most of the buildings built by the company. However, he pointed out that whether they are actually included in a particular scheme depends on the zoning in the given location.

Mateusz Juroszek, vice president of the management board of Atal, another listed residential market giant, said that in his company the annual amount of completed commercial space varies a lot depending on the kind of projects that obtain occupancy permits in a given year. For example, in Warsaw Atal delivered six commercial units totaling 611 sqm last year. Meanwhile, since the beginning of this year, the company has already completed 39 such units in the city, with the combined area amounting to 2,382 sqm.

Also, the annual sales of commercial units vary depending on Atal’s offer in a particular period – across Poland, this means from over ten to tens of units. Since the beginning of 2017, the developer has sold a total of 33 such units in Warsaw, Wrocław, Kraków, Łódź and Katowice. According to Juroszek, demand remains at a very high and stable level, especially when it comes to projects in prime locations. “We have not noticed any major fluctuations in demand and supply in recent years,” Juroszek said. 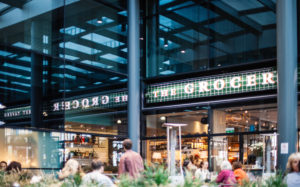 While a certain amount of space often remains vacant for some time after a project’s completion, generally speaking developers do not seem to have any serious difficulty in commercializing retail and service units in their schemes. Łukasik admitted that some of the units are built only because the space is not fit for apartments and that they may thus not be carefully planned. However, “residential developers do not have to be retail space experts,” he argued.

In his opinion, they see commercial units as a potential additional source of profit. Bieliński, who maintained that demand has been on the rise, claimed that “commercial units are seen by investors as an alternative to the still very popular investments in housing units.” Whether the space is successfully commercialized depends on several factors. Bieliński pointed to the volume of pedestrian traffic and the availability of parking spaces as some of the most important. Indeed, the number of inhabitants in a given location is crucial.

Kołodziejczyk cited the example of the relatively new and fast-developing Miasteczko Wilanów residential area in the Wilanów district of Warsaw. Over the first few years of the neighborhood’s existence, the leasing of commercial space there proceeded rather slowly. The situation changed drastically when the number of inhabitants grew and the first office buildings were built in the location – the interest in leasing and buying commercial space in the area soared.

Katarzyna Kajak, the sales and marketing director at developer Pro Urba, said that sales of commercial units in the company’s 19. Dzielnica upmarket residential project in Warsaw have been growing along with the completion of the subsequent phases of the scheme. That growth has also been spurred by the development of the entire neighborhood. The 19. Dzielnica investment is located in the quickly developing Rondo Daszyńskiego area of the city, close to a new subway stop and numerous new office buildings.

Kajak argued that investors are interested in buying commercial space in such a location as they can count on a steady supply of customers. Also, the demand for new services, which has been generated by new residents of the estate, has been on the rise. “In 19. Dzielnica we observe various business models. On the one hand, there is a big group of individuals who set up their own businesses here. On the other hand, we deal with investors who later rent commercial spaces to individual entrepreneurs or to chain stores,” she said.

Certainly, apartment buyers pay a lot of attention to the availability of goods and services needed in everyday life. The lack of stores and points of service in a neighborhood can put a potential client off buying residential property there. In the opinion of Ewa Przeździecka, the sales and marketing director at Unidevelopment, the growing significance of the convenience sector in the retail market allows one to be optimistic about future demand for commercial units in new residential schemes. 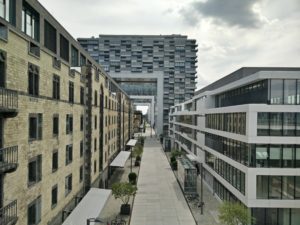 Commercial space is most often bought by investors directly from developers and then leased out to retailers, often during the construction process. “Because of a smaller financial commitment, in most cases leasing a unit is more attractive,” Kołodziejczyk said. Typical tenants include grocery stores and other businesses offering consumer goods and basic services. There is a trend toward opening restaurants, ice cream parlors and cafes in new residential buildings as people tend to eat out more and more often.

However, this is not the only popular model. Bukowski said that sometimes developers choose to commercialize units themselves to then be able to sell them with a signed lease deal and get a better price. Apart from offloading commercial space in its housing schemes, Dom Development earlier this year also started to lease it. A unit that already has a tenant is more attractive to those investors who are looking for a complete investment product, Bieliński explained.

Another trend is the delivery by developers of built-to-suit commercial space. According to Kołodziejczyk, this is a very common practice when it comes to larger units that house stores or specialized (for example medical) services. Bieliński said that Dom Development cooperates with tenants on the delivery of built-to-suit commercial units. These are mostly retail chains which have expansion strategies and can thus make decisions relatively early regarding the choice of new locations.

In contrast, Atal does not offer this kind of service. Each buyer tailors and arranges the space according to their own needs, Juroszek said. Przeździecka admitted that the development of built-to-suit commercial space is the optimal solution for a residential developer. However, she argued that in practice this rarely happens. At Unidevelopment most transactions are signed after the start of construction. The company most often tailors units to buyers’ needs while they are under construction or even after they have been completed.