Being your own boss 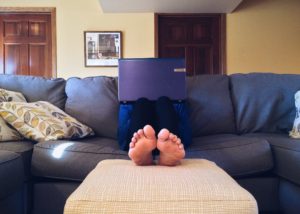 Journalist, dentist, lawyer, notary, translator, architect, business coach, photographer, psychologist. Many of these professionals opt against working the traditional nine-to-five. Very often they do not even want to work full time. And the economy is in their favor. They can render their services online, with geographical location not being a factor. Poland has become an attractive place for professional freelancers.

Post-transformation Poland saw the first liberal professions appear. Even some occupations of public trust, such as notary, underwent the process of decentralization. Still, back in 2013 Poland was a European record-holder in limiting access to occupations, because the list of regulated professions consisted of as many as 380 positions. Since that time, however, we have seen substantial deregulation of some liberal professions. In 2017, nearly 10 percent of small and medium-sized businesses were run by freelance professionals.

“People described as freelancers are a very varied group, as are the reasons why they give up on steady employment,” said Anna Wicha, CEO of Adecco Poland. “It is however a fact that the group is growing at an increasing pace. When Walter Scott used the word ‘freelancer’ for the first time in his novel ‘Ivanhoe’ back in 1820, he surely did not expect the term to describe a third of working people in Europe and the US.”

Poland seems to be on the same track. According to Eurostat’s latest available data (2016), 1.05 million Poles had more than one job (out of the total 15.9 million working Poles). Moreover, the percentage of people with higher education working for more than one employer was as high as 16.3 percent.
The market is clearly adjusting to the changing working habits. In Warsaw, where there are over 110 locations offering Workspace As a Service, the share of flexible working space take-up in the total volume of space leased shot up from below 0.5 percent in 2017 to 14 percent in Q1 2018, according to real estate consultancy Savills. 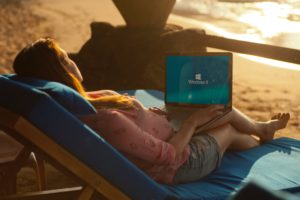 Freelancers can certainly enjoy a good life in Poland. People wishing to work on their own terms are supported by favorable market conditions now. Building an individual brand and client portfolio has become easier than ever because of the growing demand for specialized, or even hyperspecialized services.

According to a 2017 report on liberal professions prepared by Deutsche Bank, freelancers value flexibility of the workplace and working time the most (51.7 percent). The second most commonly indicated advantage of a liberal profession is the opportunity to develop themselves professionally (13.3 percent), followed by running your own business (10.2 percent) and balancing work with personal life (8.2 percent). “The majority of people spend eight hours at work each day, while the day only has 24 hours. Including commuting, we spend nearly a third of our lives in the workplace. Not everyone is happy with that,” commented Wicha. As a freelancer, you manage your own time. You can take mornings off, go to the gym in the middle of the day or take a nap after lunch. 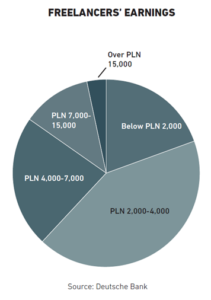 Interestingly, according to the Deutsche Bank research, very few professionals see a liberal profession as an opportunity to have above-average earnings (approx. 2 percent) or enjoy social prestige (also a single-digit share). After all, name-dropping is harder if you work for a one-man company.

The interesting thing is that the earnings of freelancers are higher than the earnings of full time workers, if calculated by working hours. Overall, however, only 3.3 percent of these people earn more than PLN 15,000 per month. As many as 42.5 percent make a modest PLN 2,000-4,000, while close to 12 percent obtain earnings of PLN 7,000 to PLN 15,000.

One problem could be the lack of stability. Over a third (39 percent) of respondents have drawn attention to the problems of steady inflow of new orders, which probably can be a challenge for freelancers who have only just begun building their brand.

Their income can be very diverse, and ensuring regular earnings is a problem for 42.6 percent of freelancers. A journalist, architect or business coach can earn multiple wages of a full-time worker but he or she has to work for this success for many years. “Every freelancer will admit that there are months where they see a five-digit salary. But there are also months where all of these digits are zeroes,” Wicha commented and added, “This is a risk that many employees are more and more willing to accept in exchange for freedom to manage their own time.” 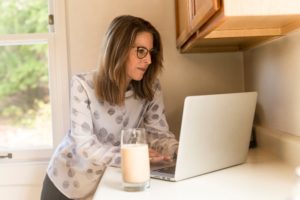 Liberal professions mean responsibility. The biggest challenge for freelance professionals (48.5 percent) is the continuous need to compete with other people offering the same service.

A lot of specialists are also afraid of the consequences of making a mistake and 43.4 percent see the legal responsibility for their work as a challenge. A lawyer or a notary may experience problems associated with legal negligence. A journalist risks being sued for libel and the newspaper’s editors will not stand in his or her defense. Translators, copywriters, graphics designers and even architects face the problem of numerous revisions and iterations of the same work. These people find other things far more important, such as opportunities to develop and learn, and relatively simple regulations governing a single-person business. 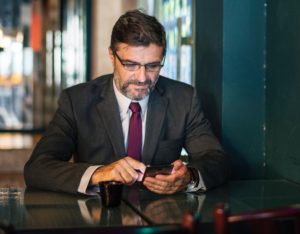 However, freelance professionals must be aware of the dangers concerning their retirement age. This is why they save money themselves. The average Pole shows a significantly lower willingness to save for their pension than a freelancer. In 2017, almost half of freelancers (47 percent) declared they were saving up for retirement, and the percentage was 6 points higher than a year earlier. Only 23 percent of Poles in general stated the same, with the percentage 5 points lower than the year before.

Moreover, the tendency to make long-term savings increases with age. Pension security is most important for people aged 55-64. Foresightedness is also a trait of professionals with above-average earnings (above PLN 10,000). Here, the percentage of people building their pension capital exceeds 60 percent.

The planned Employees Capital Pension Schemes (PPK) is also going to look after freelancers, at least those who are obliged to pay social security contributions. They will be offered the option of long-term savings in the newly established system, on par with regular contract workers.

Despite the liberalization of services in Poland, at the same time there is a tendency to organize new professional groups based on the principle of a compulsory self-government. The architect’s profession can be an example here. Meanwhile, other groups, e.g. land surveyors, cartographers, social workers or judge-commissioners took it upon themselves to establish corporate self-governments. Further evolution of professional self-governments comprising the occupations of public trust will depend on whether we find a balance between treating a liberal profession as a company and considering its functions in terms of public duties. It is certain that freelancers are indispensable, and they will continue to be so in the future.