Did you know – A short history of coaching 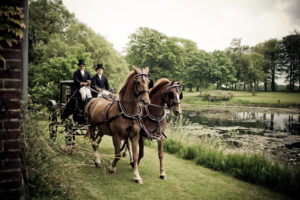 The English word „coach” comes from French in which, in its turn, it appeared thanks to the Hungarian town Kocs where the first wagon was constructed in XVI. As a result, they started calling the work of coachmen „coaching”.

After that „coach” started to have other meanings which diverged from its sources. Namely, in 1830 it was used in university jargon to mean „tutor” who safely led a student through their exams. In 1861 this word was used in sports environment to mean „trainer” who helped a sportsman to have remarkable achievements.

A different etymology is provided by David Clutterbuck who sees the origin of the word „coach” in „coax” which means „persuade someone gradually or gently to do something” , which would point out the persuasive character of a coaching conversation.

To this day the word „coach” remains to have many meanings. It means „trainer”, „tutor” as well as „carriage” and „long-journey bus”. Although these meanings seem to be divergent, they are connected by a „coach” – a person who helps achieve the best results and „go” from one point of life to another – the one where we want to be.

The coaching process with the meaning which we understand today was born in the 70s in the XX Century in sports environment. In 1974 Timothy Gallwey, a Harvard teacher and tennis expert published his book „The inner game of tennis”, which revolutionized the general idea about how sportsmen should be trained effectively. While observing tennis players Gallwey noticed that the opponent inside the player’s head was much more threatening than the one situated on the other side of the net. And until he was defeated, the victory on the tennis court was impossible.

Gallwey reckoned that the instructors’ role was to help sportsmen get rid of their inner obstacles barring the way to effectiveness. They were not supposed to point out mistakes and say how to avoid them, but ask questions thanks to which contenders could discover themselves what mistakes they made and learn how to eliminate them.

The new method of training appeared to be unusually effective and quickly entered other fields of sports and from there it came to business.